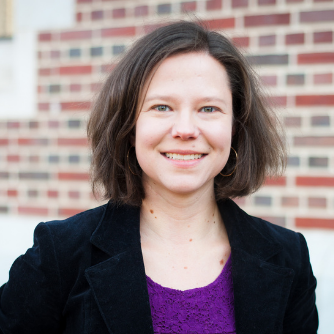 Our Campus, Our Languages

Hannah Eldridge is an Associate Professor in the Department of German, Nordic, and Slavic+.

What languages do you speak/use?
English and German

Could you tell me a little bit about yourself?
I am an associate professor in German literature, language, and culture and the Director of Graduate Studies for German. When I was nine years old, there was a girl in my class who was from Germany and she taught me a couple of words and my interest escalated from there. I started taking German in sixth grade. I lucked out and got to go to Germany in high school, and ever since then I knew that I love language, and I love talking and thinking about literature and culture.

In my research, I specialize in lyric poetry, which means that I have a relationship to language that goes far beyond the exchange of information. It involves tricky and endless direct forms of communication.

How do you feel your languages add value to your work?
I think, as a literary scholar, it’s happening all the time that languages add value to my work. I think that the awareness of the multiplicity of cultural traditions that comes from knowing and working in different languages is valuable, precisely because I don’t work in or on the dominant language in the country in which I live and teach. And that makes a big difference because you have this burden of communicating clearly to people who aren’t as rooted in what you’re working on. And of course, I am an outsider to the German tradition as well. So being in some sense an outsider is a very productive position to be in because you don’t take much for granted. You’re open to surprise and seeing things and a little bit of a defamiliarized way.

To what extent do you feel others on campus value your language?
I think that we’re stronger when we argue for the value of all languages and we don’t pit German against French, against Thai. I will say that overall, among the departments in languages, literatures and cultures, there’s a strong mutual support of different languages. I haven’t felt or seen competition or the idea that some languages are more important than others. Beyond that, I think that there is confusion about what it means to be in German Studies or in French or Italian or Thai (etc.). And I think that there is a misconception that being in those fields means just doing the first four semesters of language teaching. First, I want to say that there’s no ‘just’ about it. There’s an awful lot of intellectual, psychological, and introspective work that goes on in those classrooms. And second, Germans studies is Queer Studies, German Studies is Memory Studies, German Studies is Religious Studies. German Studies is all of these things, and I think that we don’t always do the greatest job of communicating that.

In what ways do you believe the campus community can better recognize the value that linguistic diversity brings?
Point one would certainly be to recognize linguistic diversity. Learning a language is not just about being able to order a Diet Coke; it’s about identity, cultural access, expression, justice. It’s about having a language that you need, not just to the words, but the codes and the conventions to access rights and institutions in the society in which you live. So that’s point one and point two is to recognize or to stop this misconception that some kinds of linguistic diversity are valuable, like language teaching, conference papers in a different language, summer schools in European languages. But some – regular undergraduate students who are from non-English speaking countries or speak with different accents, different variants of English, or facilities workers or university staff speaking other languages (I’ve met those who speak Hmong and Spanish) – those are not valued. I think we need to break down that hierarchy to help people understand that the value that linguistic diversity brings isn’t just a place for the classroom or the conference table, it goes for our entire institution and it makes the entire institution richer and stronger.