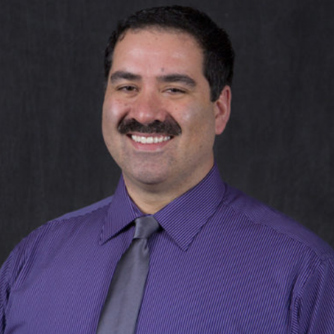 Our Campus, Our Languages

Adam Hills-Meyer is a Content Strategist, in the Center for User Experience, which is part of Academic Technology in the Division of Information Technology.

What languages do you speak/use?
English with some experience in French, Italian and Spanish

Could you tell me a little bit about yourself?
I have been at UW-Madison for a little over five years. I design things behind the scenes so that a user’s digital experience is better.  I enjoy traveling a lot. I have studied a couple different languages in my life, hence the traveling. I like to see different spaces. I like to see how different people interact with each other. I always circle back to the feeling that we all have things very much in common, even though we might be on different sides of the planet.

How does language intersect with your work?
In designing things that more people can use, the concept of different languages comes up. When designing, we’re asking how we can make a webpage or an app in a way that is inclusive and accessible, both in terms of accessibility for people with disabilities but also accessible in terms of user understanding. It’s kind of the concept of universal design. Language absolutely falls into that bucket because we all have different languages that we speak and not everything translates word for word, nor does Google Translate do a perfect job of translating a page for say, users who were not born in Wisconsin and don’t necessarily know the culture and language that is used here. So we try to think about ways that we can make things more inclusive and accessible. Language is absolutely one of the areas.

Have you ever observed linguistic prejudice or discrimination?
Of course. If you say you haven’t, you’re probably just not paying attention. Those who are not paying attention probably have the privilege to not pay attention.  Much of what I have experienced has come in the form of a joke, but is laden with microaggression. Maybe that person doesn’t understand they’re discriminating because they have the privilege to not understand. I think there’s a lot of problematic language in English. An example of inappropriate language is when you’re describing hacking in the cybersecurity world. There is black hat hacking and white hat hacking. If you’re a white hat hacker, you’re ethically hacking for the better good. If you’re a black hat hacker, you are doing something insidious and bad. The use of language in how we describe things matters.

How do you believe that linguistic diversity adds to the richness of the various communities you navigate?
When we see other people that are different from us, that’s good. That’s a good thing when we understand that it’s okay that there are differences between us. I speak from a white male perspective because that’s my tunnel vision that I see the world through. Sometimes it’s good to see that there are differences in people because we are different people. When we make an effort, such as in an email, to include Hmong, Chinese, Spanish, and other languages, it shows that we’re valuing those people and we’re respecting their space. It’s disrespectful to others to suggest that just because we are in America, that English should be the only language used. It’s showing that it’s okay to add people to make things more inclusive so we can be more together.

In what ways do you believe the campus community can better recognize the value that linguistic diversity brings?
Speaking through the design angle, we design a lot of things at UW Madison, whether people think they’re designers or not. I would include anybody that writes an email, an essay, or a syllabus. Those are all facets of design. When designing, we want to think about including more people as opposed to designing something that would exclude people. In terms of language, different languages have different cultural contexts. We can adjust the language to match the cultural context in what we outwardly display in our design. I think that’s important. So when we think about those things earlier on in the design process, we think about accessibility and about the different ways people might interpret this information we share.  It gives the person who’s experiencing that design, like the student who’s reading a syllabus about a course, the feeling that they are included in what’s going on. Instead of leaving that student on the outside of it, where it can feel like “oh no, that’s not for me, these people are not considering me. They’re not seeing me as a person.”